Back to the news overview

“Multinationals have Ethiopia high on the radar.”

A brand-new malt house started operations in Ethiopia in December 2020, fulfilling a long-time wish to use more local ingredients for beer breweries. The malt house is owned by the Belgian/French multinational Boortmalt. However, it was up to the NABC member, Remco International, to construct the steel structure, roofing, walls, and conveyor bridges.

“This new malt house, located some 130 km from capital Addis Ababa in Debre Birhan, can produce up to 60.000 tons of malt per year,” said Jurgen van der Weide, the General Manager of Boortmalt’s plant. “This gives the opportunity to the beer breweries in Ethiopia to source all barley needed for beer production from Ethiopia, rather than having to import it,” Mr. Van der Weide said. 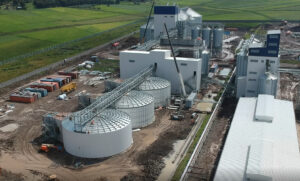 Ethiopia’s beer market has accumulated a lot of interest from Dutch companies. For instance, there is a large presence of the NABC’s strategic partner Heineken in the country and the famous Habesha beer is a joint  venture that includes Dutch brewer Bavaria. “Producing
barley locally is an important milestone for Ethiopia,” explained Kassahun Minalu, an Ethiopian engineer who studied Civil Engineering in the Netherlands and who played an important role in implementing the new plant on behalf of Remco International. “With this new
malt house, the breweries can use their earnings in the Ethiopian currency to buy the ingredients locally. This reduces their need for foreign exchange, which is of short supply in the country,” explained Mr. Minalu. “The new malting plant also has a positive impact on
the local barley producing farms, in increasing their productivity and controlling their product value better.”

Mr. Minalu understands both the Ethiopian context and the wishes of the Dutch construction company Remco International and has, therefore, been in a good position to get this project off the ground. According to Erik van den Hurk, Export Manager at Remco International, working with a local agent in the Ethiopian market has had many benefits. “By working with a local agent, there is no need to set up your own legal entity for a project but you do have the local expertise and you can handle issues needing to be addressed quicker. Certainly, while doing business in times of Covid-19, we saw it is not as easy as before to fly someone in from the Netherlands.” However, with Africa on the rise, how come foreign companies are still so instrumental in building factories on the ground? Mr. Minalu explained that “currently there are a lot of high-rise buildings under construction in Addis Ababa. You can see them sometimes 30 to 40 meters high, but still the scaffolding is made out of wood. Safety standards for construction workers, as well as the quality requirements in general, are still not the same as in Europe. On the other hand, things are improving. For the construction of the malt house, for instance, most of  the construction workers were Ethiopians.”

Mr. Van den Hurk agrees. “We used less European supervisors for this project than we did while working on a giant beer brewery in Ethiopia earlier on. We see an improvement in the quality of the constructors.” Putting his job into a historical context, Mr. Van den Hurk is 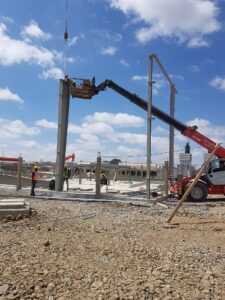 upbeat about the developments in the local African steel market. “Remco International has been existing for almost 50 years. I remember when we first started operations in Eastern Europe thirty years ago, no steel was produced there and everything was imported from Western Europe. But when demand was rising, high-quality local steel production picked up. Now, some of the steel that we used for the Boortmalt plant actually comes from Eastern Europe. When Africa’s development continues at this pace and demand for high-quality steel remains high, opportunities for local steel production will increase and I am sure someone will grab that opportunity.”

Until then, importing remains the method of choice. Remco International shipped 33 containers (40 feet) to Ethiopia in order to have all required materials on-site. Mr. Van der Weide of Boortmalt added: “We are very satisfied with the quality of the plant that has been delivered by Remco International. We know that the beer market in Ethiopia can grow very quickly so in the designs we made provisions for a possible doubling of the production to 120.000 tonnes per year.” This is not unrealistic, according to Mr. Minalu, Remco’s agent in Ethiopia. “Look at the Heineken factory that was built in 2014. They started extending it two years later and a second extension was completed in 2019. Ethiopia has 110 million inhabitants and beer has proven to be very popular, despite the recent ban on advertising alcoholic beverages.” Kassuhan Minalu is not only positive about the market for beer, but sees opportunities in other sectors as well. “If our country can overcome the current political challenges and alleviate the foreign currency shortage then there is a bright future ahead. I see opportunities in the automotive industry, agro-processing, fast moving consumer goods, you name it. Multinationals have Ethiopia high on the radar.”

Read more about this project